A To Z Of the Salvation Army

With more than 1,500,000 members and adherents in 109 countries, there is hardly anyone nowadays who is not familiar with the Salvation Army. And while many have been directly affected by its activities in health, relief, and community service, it is rare that one knows much about this unique Christian movement, which was founded in London in 1865 by William Booth-its first General-and has continued growing ever since.

Whether merely curious, impressed by its work, or among its members, The A to Z of the Salvation Army provides a wealth of information for those who want to know more. This excellent source on all varieties of aspects related to the Salvation Army-its history, organization, structure, beliefs, and activities around the world-sums them all up in a broad introduction. It then presents the information in greater detail in hundreds of cross-referenced dictionary entries, while nearly a century-and-a-half of history is traced in the chronology, and further reading is indicated by two extensive bibliographies. This volume, written by more than 150 contributors-all specialists on different aspects and countries-under the direction of Major John G. Merritt, concludes with nine appendixes, including the first-ever published list of the more than 425 men and women who have attained the rank of Commissioner. 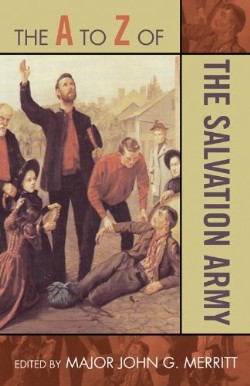