Additional Info
It will come as a surprise to many, if not most, to learn that there are at least some 137 men and women who have lived in North or South America who have been beatified or canonized by the Roman Catholic Church. Sixty of them were canonized and 77 beatified. Most of these, fifty of them, came from Mexico and another eight North American Martyrs. Individually Canada boasts another twelve saints or blessed and the United States, nine. Seven were from Peru; three each were from Colombia, Ecuador, and Paraguay; two each were from Argentina and Childe; and one each from Guatemala, eight of these were beatified or canonized within the last one hundred years or so. Of these, Pope John Paul II was responsible for the canonization of 28 and beatification of 32 others. This little book is a fascinating, brief introduction into the lives and struggles of these saintly men and women.

Be the first to review “American Saints : Five Centuries Of Heroic Sanctity Of The American Contine” Cancel reply 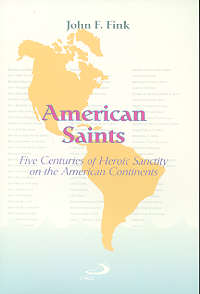 You're viewing: American Saints : Five Centuries Of Heroic Sanctity Of The American Contine $9.95
Add to cart