The principles of material logic, an important part of trivium language study, are now almost completely forgotten–a casualty of the almost exclusive modern secular emphasis on the quantitative sciences. This has resulted in the rise of systems of modern logic that are more math than logic. Formal logic was once termed minor logic, while material logic usually went by the name of major logic–possibly a measure of how important classical thinkers considered it. There is a huge gap between formal logic courses and so-called ‘thinking skills’ courses. Formal logic focuses exclusively on the systematic study of the structure of reasoning. ‘Thinking skills’ courses, on the other hand, tend to suffer from a highly non-systematic, topic-hopping approach, where the student is unable to see how one principle connects with another. Whether you want a follow-up course to Memoria Press’ popular Traditional Logic program, or simply an introduction to logic for high school students, this program is a valuable tool in teaching your student how to think.
These DVDs are an accompaniment to the books sold by Memoria Press.

Be the first to review “Aristotles Material Logic” Cancel reply 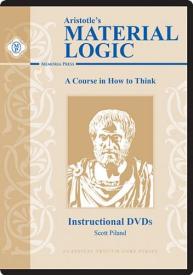