Only a person with faith can conclude that the Holy Spirit protected and led the Catholic Church during the turbulent years before, during and after the momentous Council of Trent. There were during this period political and religious wars and intrigues on a grand scale, the unbecoming private life of some Popes, robust papal nepotism, redrawing of Europe’s map, serious attempts at inner Church reform, intense missionary activities, martyrdom, new scientific discoveries, and so forth. On the human level, there was every cause and reason for the Catholic Church to disappear. But she did not. History supplies the fact that the Catholic Church survived and grew despite everything. Faith supplies the reason for her survival. This book, the third in its series, provides its reader with a flavor of what took place during the time of the Counter-Reformation. The Catholic Church confronted its failings, became renewed and refreshed, and spread beyond Europe. The author hopes to lead the reader to embark on further study and research in Catholic Church history once major Church events and significant persons are at the fingertips.

Be the first to review “At Your Fingertips 3” Cancel reply 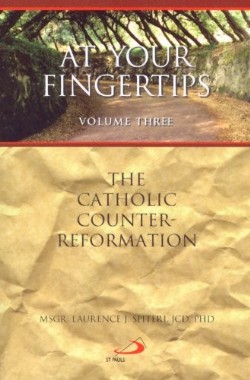