Desert Breeze Publishing Inc.
Drew Presley’s wife was murdered while he was serving his country in Iraq. Giving up a career he loved, he’s returned to Dauphine Island to care for his son and try to make a new life for them. The unsolved murder of his wife continues to plague him. The islanders are very protective of their own and he fears a killer is among them. The more he searches for answers though the more dangerous it becomes. Just as troublesome is his attraction to his son’s second-grade teacher.

Trudy Walsh was Nora Presley’s best friend so the bond she has with Nora’s motherless child is only normal. And when Reed’s father begins to volunteer on the set of the spring play, she begins to second guess the stale relationship she is currently in. Drew’s obsession with his wife’s murder threatens their friendship when he begins to suspect a fellow islander.

Be the first to review “Betrayal” Cancel reply 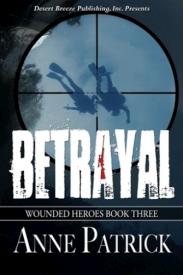