A Be The People Books Title

In schools and workplaces across the United States, Americans are being indoctrinated with a divisive, anti-American ideology: Critical Race Theory (CRT). Based in cultural Marxism, CRT bullies and demonizes whites while infantilizing and denying agency to blacks, creating a deep racial rift. As Abraham Lincoln famously observed, “A house divided against itself cannot stand.” CRT aims to divide the American nation against itself and burn down the house.

In Black Eye for America: How Critical Race Theory Is Burning Down the House, Carol Swain and Christopher Schorr expose the true nature of Critical Race Theory, and they offer concrete solutions for taking back the country’s stolen institutions. They describe CRT in theory and practice, accounting for its origins and weaponization within American schools and workplaces; explain how this ideology threatens traditional American values and legal doctrines, including civil rights; and equip everyday Americans with strategies to help them resist and defeat CRT’s pernicious influence.

Be the first to review “Black Eye For America” Cancel reply 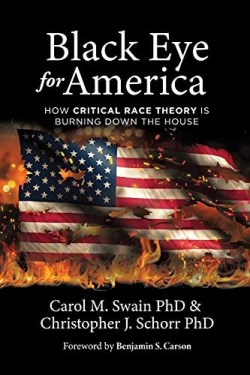