A simple phone call could have resolved many problems that confronted the churches organized by Paul. But, of course, there were no telephones then which is why the believers had to track Paul down and send him a letter with their questions. Later Paul dictated a reply and sent it to the church. This process could take months, during which the false doctrines and misunderstandings had time to develop and spread.This appears to have happened in Thessalonica. In the time that it took Paul get the information and write the reply that we know as 1 Thessalonians, new problems arose that Paul deals with in 2 Thessalonians.These letters are based in the confidence that Paul had in God’s guidance for his early church. The apostle could see the divine leading in the continued spiritual growth of the church in Thessalonica. He believed that God protects His children from spiritual dangers and saw these small interventions as a foretaste of the great final intervention of God.As you review the experiences of Paul and the Thessalonians, it is my prayer that the same God that was with them will become more present in our lives.

Be the first to review “Cartas A Los Tesalonicenses” Cancel reply 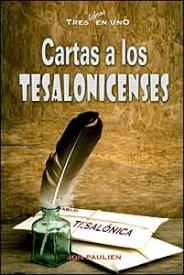 You're viewing: Cartas A Los Tesalonicenses $11.99
Add to cart