Celebration Of The Eucharist

Additional Info
Volume Two of this trilogy on the Liturgy for the People of God deals with the Mass as a celebration of the Christian community. It speaks of the four ways in which Christ is present during the Liturgy. The assembly, the alter, the ambo and the tabernacle along with the role each has in the celebration are discussed. There are eight elements in the Eucharistic Prayer just as there are eight steps to holiness, both of which are explained in detail. A study of the Mass follows, beginning with the Opening Rites, the Liturgy of the Word, a General Overview of the Liturgy of the Eucharist, Holy Communion including some pastoral points, and ending with the Concluding Rites and a few words to those who preside at the celebration. Here serious theology is interspersed with practical pastoral and spiritual suggestions to make the liturgy all that is meant to be. Every Catholic will recognize the various scenes that Father Miller humorously describes to illustrate his points. The liturgy is the work of the people, and that means that some effort is required if we are to achieve the full, active participation in the liturgy recommended by the Second Vatican Council. The Mass is the highest form of prayer possible to us since it is the worship which Christ himself offers to his Father in union with all the people who are united by the power of the Holy Spirit as one body in his Church. This book helps to show us how we can make it all it is meant to be. Volume One of this series deals with the Foundations of Vatican II Liturgy and Volume Three treats the Sacraments and Other Matters Liturgical.

Be the first to review “Celebration Of The Eucharist” Cancel reply 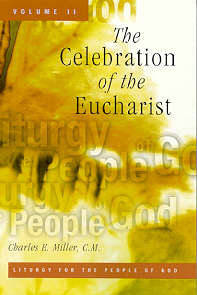 You're viewing: Celebration Of The Eucharist $14.95
Add to cart