Saint Athanasius was one of the great leaders of the early Church. During the fourth century there were many great men and women of faith, but none of them did more to further the cause of Christ than this diminutive bishop from Egypt. Trying times require the best of men and the best from men, and that is exactly what the Chrurch got in Athanasius. At a time when the Church faced the most insidious heresy of all, Arianism., one man rose above the all others to combat it – and combat it he did. On Several occasions his great struggle for the truth brought him near to martyrdom. But such was not to be God’s will. Instead, he was to spend the fifty years of his adult life in a courageous, bloodless, martyrdom tenaciously fighting for the truth. For his life-long defense of the divinity of Christ, Athanasius is called the Father of Orthodoxy and
the thirteenth apostle. During his lifetime Athanasius wrote several books. His work On the Incarnation, written when he was just nineteen years old, is one of the best ever written on the subject. Many of his works were penned to counter the Arian heresy. His biography of Saint Antony, the great desert ascetic, was a best seller of the day. This book did much to promote the cause of monasticism in the East. One of the greatest Fathers of the early Church, his legacy, like a beacon, has continued to shine throughout the ages. This is the story of his life.

Be the first to review “Champion Of Truth” Cancel reply 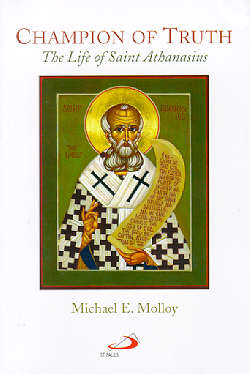 You're viewing: Champion Of Truth $9.95
Add to cart