Complexities Of Money And Missions In Asia

1. Buddhist Perceptions Of The Christian Use Of Funds In Sri Lanka
G. P. V. Somaratna

3. Money And Missionary Lifestyle In The Buddhist World
Andrew Thomas

Additional Info
What happens when an expatriate missionary is thrust into a context where the standard of living is so divergent that perceived or actual wealth suddenly becomes the strongest draw of attraction? What actual message is communicated through the wordless witness of the Western Christian missionary lifestyle? Is attention to so-called good news now so financially focused that other foundational issues become overshadowed? This issue becomes even more complicated when the missionary arrives clueless about personal privilege, ignorant of the envy of others, and carries the mistaken attitude that others think similarly. SEANET proudly presents Complexities of Money and Missions in Asia for all who are asking such questions. From seven different indigenous and expatriate perspectives this volume deals with the perceptions of money specifically from those seeking to serve obediently in the Buddhist contexts of Asia.

SEANET serves as a networking forum wherein groups and individuals can meet to reflect and strategize together on topics particular to their collective mission. SEANET does not promote one particular strategy or one particular theology but seeks to learn from models of hope that show what God is doing around the world. Each year the annual SEANET conference brings together over one hundred and fifty practitioners who are privileged to live and serve throughout the Buddhist world. The chapters of this volume represent seven of those voices from the network. 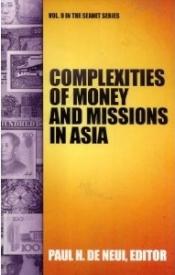 You're viewing: Complexities Of Money And Missions In Asia $15.99
Add to cart