Dezert Breeze Publishing
I do not think it is a question of where, but when. These were the words Charis, the Prophet, left Christina’s mother with when Christina disappeared from Meric… before she was even born.

Christina Vaughn has a pretty normal — albeit lonely — life in Pittsburgh, Pennsylvania. Until one day she’s transported to the fantastical land of Meric. Within her first twenty minutes in this crazy place she’s been attacked by man-eating Vaipes, learned her father was a power wielding Guardian, and discovered that the silvery-blue eyes intriguing her for her whole life belong to her Watcher, Shaw.
Oh yeah… and she’s the prophesied Savior who’s supposed to save Meric from a war-mongering tyrant who can manipulate people’s thoughts and control their minds.

Christina’s question isn’t where or when… it’s how. How can she save the people of Meric when she can’t even keep herself from falling in love?

Be the first to review “Conception : Future Savior Book One” Cancel reply 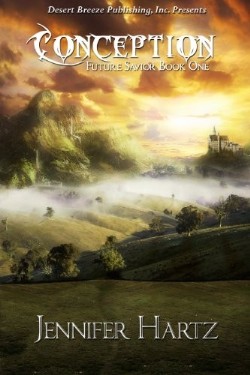 You're viewing: Conception : Future Savior Book One $9.99
Add to cart