In 1940, the Germans invaded the Netherlands, and Corrie ten Boom and her family helped to hide as many Jewish people as possible. They even had a secret room built in her bedroom.

Corrie and her sister were caught by the German army and sent to a concentration camp, where God made sure they always had a Bible to read and plenty of opportunities to share the good news about Jesus.

Corrie’s trust in God gave her the strength to go on until the war ended. From then on, Corrie talked about her life to big crowds, saying, “There’s no pit so deep that God’s love is not deeper still”.

Be the first to review “Corrie Ten Boom” Cancel reply 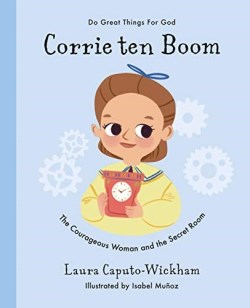