She was born to kill, born to die.

Can an assassin be a friend?

Crescent is a crowhopper-a genetically modified mercenary programmed for ruthless warfare. For her it’s a disaster when a young man denies her the chance to die in battle. When Crater Trueblood captures her, takes her home with him to Moontown, and actually treats her kindly? That’s beyond comprehension.

Crater is weary of war. He’s a miner, not a soldier. He’d rather spend time working than battle the infernal crowhoppers and their bosses from earth. When he captures a little crowhopper and brings her home, he’s surprised to enjoy her company. When she’s falsely accused of murder, he becomes an outlaw to help her escape.

Maria Medaris, like her grandfather, is a ruthless competitor in business and in life. She’s well on her way to building an empire for herself. But she’s haunted by the memory of a young man she traveled with three years earlier, the man she’s vowed never to see again. Crater Trueblood.

When a murderous band of assassins attack, Crescent, Crater, and Maria escape into the big suck and trek with a caravan of mining pioneers toward a lunar ghost town called Endless Dust. To survive they must do more than navigate the beautiful, desolate moonscape and battle a persistent band of crowhoppers. They must decide what-and who-is truly worth fighting for.

–This text refers to the Paperback edition.

Be the first to review “Crescent (Unabridged)” Cancel reply 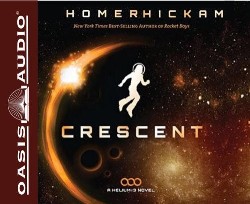