Additional Info
The term antisemitism was coined by Wilhelm Marr in 1879. Marr’s secular, political racism existed inconsistently alongside his religious anti-Semitism. His self-proclaimed goal was to free Christianity from the yoke of Judaism. While the term might not have existed before the 19th century, the persecution of the Jewish people dates back more than three thousand years.

The Dictionary of Antisemitism is the first and only dictionary ever published that is dedicated solely to this subject. Spanning 3,000 years of antagonism to Jews, the dictionary details not only the longest hatred, but also the most widespread, covering the five major continents. A comprehensive scholarly introduction discusses the definitions, causes, and varieties of antisemitism before the dictionary gets into the specifics. The dictionary section itself contains 2,500 entries, ranging from Aaron of Lincoln to Zyklon. Entries can be found on all forms of antisemitism, such as ancient, medieval, and modern antisemitism; pagan, Christian, and Muslim antisemitism; and religious, economic, psychosocial, racial, cultural, and political antisemitism. This essential dictionary provides comprehensive coverage on this compelling subject, and as such, it will remain important for years to come.

Be the first to review “Dictionary Of Antisemitism” Cancel reply 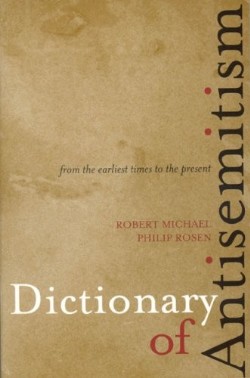 You're viewing: Dictionary Of Antisemitism $67.00
Add to cart