Doctors Of The Church 2

Additional Info
Sixteen of the 33 men and women who have been declared Doctors of the Church lived in the second millennium. In contrast to the Doctors of the first millennium in which eight were from the Eastern Church, all those of the second millennium were from Europe. The Second millennium produced the real giants among the Doctors of the Church, three of whom were absolutely remarkable women. As in Volume One of this work, John Fink has provided here brief profiles of the life of each Doctor followed by one or more writings characteristic of his or her work. No pretense is made that these short summaries of their lives are full biographies or that their writings are more than samples. This work is intended to be a popular introduction to the Church’s great teachers. The excerpts chosen are representative of the particular Doctor’s writings but they were also selected in such a way as to give a fairly thorough overview of Christian doctrine and practice through the centures. The Doctors included in Volume Two are: Saints Peter Damina, Anselm, Bernard of Clairvaus, Anthony of Pauda, Albert tie Great, Thomas Aquinas, Bonaventure, Catherine of Siena, Teresa of Jesus (Avila), John of the Cross, Peter Canisius, Robert Bellarmine, Lawrence of Brindisi, Francis de Sales, Alphonsus Liguori and Therese of Lisieux. 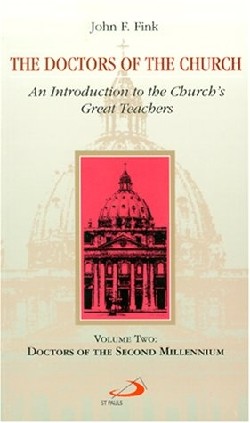