Additional Info
Cardinal Newman’s renowned poem describes the death of an old man and the journey of his soul to the judgment seat of God. First published in 1865, it quickly became a bestseller ion its field, second only in popularity to Tennyson’s In Memoriam.

This new edition of the poem marks the bicentenary of Newman’s birth in 1801; it also celebrates the centenary of the first performance in 1900 of Edgar’s choral masterpiece based on the poem. In addition to a forward by Vincent Nichols, Archbishop of Birmingham, there is an introduction by Father Gregory Winterton of the Birmingham Oratory, which Newman founded and where he lived, worked and preached for more than forty years. Father Benedict J Groeschel CFR has written a preface to the book as well. Also included are a section on Elgar’s Dream of Gerontius, which rapidly became the most popular choral work in Britain after Handel’s Messiah, and a discography of currently available recordings of Elgar’s dream.

Be the first to review “Dream Of Gerontius” Cancel reply 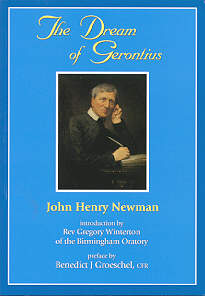 You're viewing: Dream Of Gerontius $8.95
Add to cart