Economics As If God Matters (Expanded)

In this revised and expanded edition of Economics as if God Matters, Rupert J. Ederer brings forward to the present his classic assessment of how papal social teachings address economic questions from the end of the 19th century. Noting how economic order reflects economic philosophies, which, in turn, mirror the basic philosophies and even theologies, Ederer explores the papal perspective on economics and its place in human affairs. Through the study of social encyclicals issued since 1891, Ederer illustrates the organic development of doctrine on economic matters through his detection of a series of common principles.

Written for clergy and lay readers, as well as students and scholars of the Catholic perspective on the intersection of economics and society, Economics as if God Matters is a sophisticated review of the moral purpose of one’s participation in the economic life of modern society. 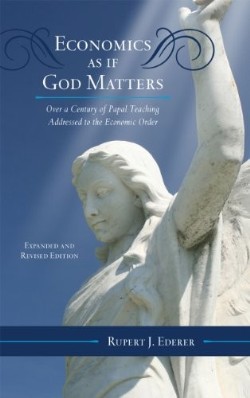 You're viewing: Economics As If God Matters (Expanded) $74.00
Add to cart