Everything Is Just Beginning

Michael Sullivan is a talented lyricist and a decent guitarist, but since he was kicked out of his band (and his apartment), he’s not sure he’ll ever get a record deal. Living with his loser uncle in a beat-up trailer and working a dead-end job, Michael has little reason to hope for a better future. Until the invitation for a swanky New Year’s Eve party shows up in the mailbox. It’s for his uncle, with whom he shares his name, but his uncle is going out of town . . .

On the effervescent night of December 31, 1989–as the Berlin Wall is coming down, the Soviet Union is inching toward democracy, and anything seems possible–Michael will cross paths with the accomplished and enigmatic young heir to a fading musical dynasty, forever altering both of their futures.

Award-winning novelist Erin Bartels enchants with this story of two lonely souls who have exactly what the other one needs–if they could simply turn their focus from what is ending to what is just beginning.

Be the first to review “Everything Is Just Beginning” Cancel reply 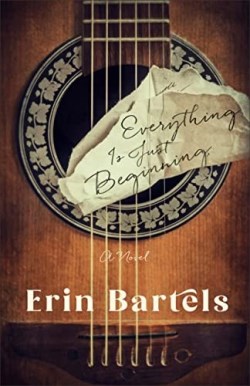 You're viewing: Everything Is Just Beginning $17.99
Add to cart