Desert Breeze Publishing
After losing the woman he loved to a rival, Roger Talbot set out to redefine his life by devoting it to public service. A decade later, he now serves at Port Delamar’s District Attorney. Having just successfully prosecuted the most high profile murder case of his career, Roger turns his attention to discovering the shady dealings of NIles Parker — his former boss and the father of the woman Roger almost married. But he can’t stop thinking about the mysterious lady who sat in the back of his courtroom throughout the murder trail.

More than ten years have passed since Pennye Carrington ran away from home and assumed a new identity. When she learns her younger brother is being prosecuted for murdering a family member of a famous movie star, she feels compelled to return home, face her violent and dysfunctional past, and try to rescue her other siblings before it’s too late.

Two people who couldn’t be further apart in their upbringing are brought together as the discover the truth behind their separate missions. In the process, might they discover each other as well as themselves?

Be the first to review “Good Fight” Cancel reply 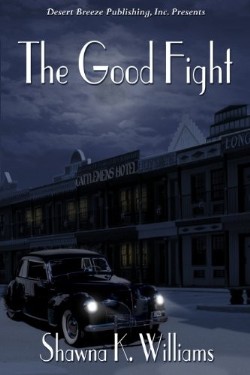