Hinduism is the world’s third largest religion and still growing. It is the oldest major religion with a tradition reaching back millennia and having many notable peaks and periods of glory. It has influenced and been affected by other world religions, including Islam and Buddhism, as well as Christianity. Despite repeated attempts to contain it, it has maintained an exceptional vigor and boasts a rich spiritual culture with celebrated thinkers and teachers and an extensive literature.

The Historical Dictionary of Hinduism relates the history of Hinduism through a chronology, an introductory essay, photos, an extensive bibliography, and over 1,000 cross referenced dictionary entries on Hindu terminology, names of major historical figures and movements, gods and goddesses, prominent temples, terms for items used in Hindu practice, major texts, philosophical concepts, and more. This book is an excellent access point for students, researchers, and anyone wanting to know more about Hinduism.

Be the first to review “Historical Dictionary Of Hinduism” Cancel reply 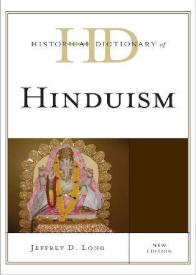 You're viewing: Historical Dictionary Of Hinduism $87.00
Add to cart