How Does The Drill Know When To Stop

At forty-one-years-old, Perry Conrad experienced a tremor in his left foot while working as a triage nurse. Parkinson’s disease crossed his mind, but the line of ER patients who sought his attention didn’t allow him to entertain that thought for long. A week later the tremor in his foot was back, this time affecting his left arm and hand as well. Accepting the patient role was an assignment he had not planned for, but Conrad could no longer ignore the signs. After personalizing the instruction he was accustomed to giving others, Conrad consulted a neurologist who confirmed his suspicion: he had Parkinson’s disease. In How Does the Drill Know When to Stop?, Conrad shares the insight that allowed him to accept and eventually overcome the limitations of Parkinson’s disease and discusses the surgery he underwent seven years later that nearly eliminated his symptoms. If the cross you bear has brought you to your knees, or if you’ve ever considered your response to the unknown adversity that awaits us all, ask yourself, How Does the Drill Know When to Stop? and discover how past experience can help guide you through the unexpected hardship you may face tomorrow. 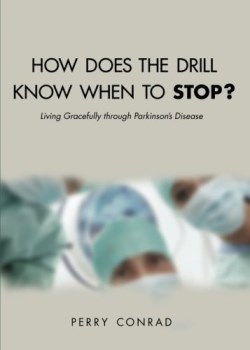 You're viewing: How Does The Drill Know When To Stop $9.99
Add to cart