I Believe In Eternal Life

Drawing his inspiration from the last article of the Apostles’ Creed (I believe in eternal life) – Cardinal Martini introduces us in this book to some fundamental themes of Christian faith and hope: life after death, judgment, the resurrection. His reflections are promoted by the fear of death, which is a natural instinct, but which does not have to transform itself into a anguish that paralyzes the heart and mind. Entrusting oneself totally to Jesus, after a sincere conversion experience, each one can find the necessary courage to overcome such fear and look ahead with confidence to the destiny which awaits. Now that Cardinal Martini has been called to go and meet the Risen Lord, these pages assume the character of a spiritual last will and testament.

Carlo Maria Martini was born in Turin, Italy, on February 15, 1927. He entered the Society of Jesus in 1944, was ordained to the priesthood in 1952 and made his solemn religious profession in 1962. In 1969 he was named Rector of the Pontifical Biblical Institute and in 1978 was nominated Chancellor of the Pontifical Gregorian University. He served as Archbishop of Milan from 1980 until his retirement in 2002. In 2003 he took up residence in Jerusalem, living a life of prayer and study. For reasons of health he returned to Italy in 2008. He passed away on August 31, 2012. His was a voice listened to and respected by Catholics and non-Catholics alike. 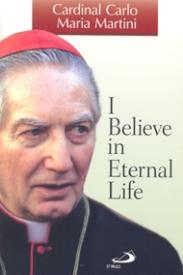 You're viewing: I Believe In Eternal Life $12.95
Add to cart