Father James Alberione, called an Apostle for our times on account of the extent and significance of his many works, was born at San Lorenzo di Fossano in the Italian province of Cuneo on April 4, 1884. When he died in Rome on November 26, 1971, comforted by the visit of Pope Paul VI, he had founded six religious congregations and three secular institutes [one more came into being after his death but had been on the drawing boards even earlier], all of which make up the Pauline Family, one of the most modern means for the propagation of the faith in all the world. Sixty some years ago, when the means of social communications were still at best in embryonic form, he had a sense that the press, radio, motion pictures and television would have a profound impact on the cultural and religious life of the twentieth century. And from that time, he foresaw concretely the vast possibilities for employing them in the service of the apostolate and set about to become one of the truly great pioneers in the religious use of the mass media. A biography of Father Alberione is not an easy undertaking. In fact, he lived an intense life, but hidden behind his work, in a way which was so shy and retiring as to resemble at times a kind of backwardness. Without any attempt to canonize the man by making him any more or less human than he was, Father Rolfo has traced for us here the profile of a man of prayer and action which, above all, has the merit of presenting us with a realistic image of an extraordinary individual who perfectly integrated into himself the obligations of his priestly vocation and the sense of immediacy which is so characteristic of the people of our times.

Be the first to review “James Alberione” Cancel reply 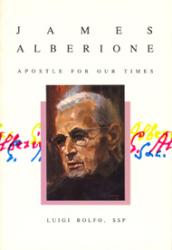