Last Week Of Seven Years And The Apostle Johns Surprise

Although hundreds upon hundreds of books have been written to analyze the prophetic riddle in Daniel 9 and the symbolic language used both by Daniel and John (Revelation), Tarry takes a slightly different approach to end-times matters.

He contends that three things make his book unique. This involves his positioning of the last week of the seven years (referenced in Daniel 9) in a different place than does the typical writer on these subjects. Many students of these matters place the happenings in this reference at the end of the Book of Revelation. Tarry contends that the first half of the last week of years begins immediately after Jesus’ death and ends at the destruction of Jerusalem 35 years later. Tarry contends that the second half of the last week of years that most writers put at the end of time includes the last great tribulation. This involves the 35-year period from the destruction of Jerusalem until Jesus appears to the apostle John to tell him to write the rest of prophecy, about A.D. 105.

In dividing the Book of Revelation, Tarry considers the three parts as Revelation 1:19 mentions: The things which you have seen (past); the things which are (present); and the things which will take place (future). His is a thoughtful and thought-stimulating commentary which is designed to inspire Christian commitment and trust in God for the end of the age. 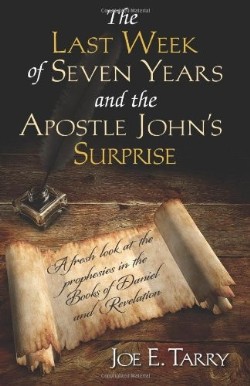 You're viewing: Last Week Of Seven Years And The Apostle Johns Surprise $19.95
Add to cart