Leftovers : Baylor, Betrayal, And Beyond

Ever since he was a young boy, Matt Sayman wanted to play basketball. He played for hours on end, studied other players, and attended numerous basketball camps. His family believed in his dream, too, even agreeing to move to Texas when one of Matt’s favorite coaches left Pennsylvania for the Lone Star State.

Matt eventually received a full athletic scholarship from Baylor University. He was only six-feet-four but what he lacked in height, he made up for in skill and positive attitude. He was destined to go pro after graduation.

Then the summer before his senior year, the bottom falls out of Matt’s world. A player goes missing…and is found dead. A teammate is the murder suspect. A coach is accused of paying players under the table. Some receive drug-free urine samples to pass off as their own. And through it all, Matt is supposed to be the glue who holds the Baylor basketball team together.

In The Leftovers: Baylor, Betrayal, and Beyond, Matt shares his personal story of dealing with the fallout after tragedy and trouble nearly sank Baylor’s program. Matt was senior co-captain, but with a short-manned team of leftover players, there was no way to have a winning season. There was no way some talent scout would take a chance on him.

Matt’s hope and faith were shaken because of the scandals that summer. He had just turned twenty-one in January and began to party and drink heavily. His post-Baylor years included a DWI, a difficult divorce, and broken relationships. Matt struggled to find peace. On his thirtieth birthday, just a few days after a deep conversation with his pastor, Matt said goodbye to alcohol and surrendered his life to God. This book tells the story of Matt’s personal redemption.

The Leftovers is also a story of the redemption of Baylor University’s men’s basketball program; Matt’s team with a young new head coach forged the Baylor team that won the 2021 NCAA men’s basketball championship.

Be the first to review “Leftovers : Baylor, Betrayal, And Beyond” Cancel reply 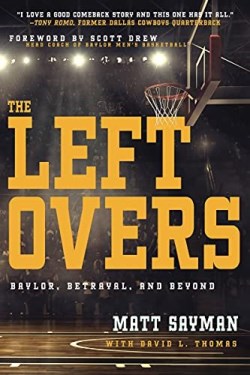 You're viewing: Leftovers : Baylor, Betrayal, And Beyond $16.99
Add to cart