New Out Of The Old

Norman Rockwell had an uncommon ability of depicting in his paintings the facial expressions of his subject. He did this especially for many covers of the Saturday Evening Post. His works became popular all over the world. He wrote: One of the most difficult problems in painting magazine covers is thinking up ideas which a majority of readers will understand. The farmer worries about the price of milk; the housewife fusses over the drapes for the dining room; the gossip gossips about Mrs. Purdy’s highfalutin’ airs. I have to think of an idea which will mean something to all of them. And it’s hard to be universal, to find some situartion which will strike the farmer, the housewife, the gossip and Mrs. Purdy. That’s the problem of the homilist, too, which Father Buetow tackles with extraordinary aplomb in this second of his three-volume set of meditations on the Liturgical Readings for the Weekdays of the Year. In the present volume, embracing mostly the gospel accouding to St. Matthew, the meaning of Jesus is shown to lie in his fulfillment of all that is embraced in the concept of the Jewish Messiah. Hence this volume, which covers weeks ten through twenty-one in the Church’s Ordinary Time, is entitled The New Out Of The Old. 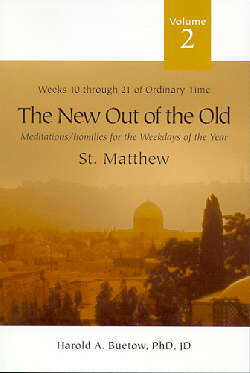