Oxford Movement And Its Leaders (Expanded)

The Oxford Movement began in the Church of England in 1833 and extended to the rest of the Anglican Communion, influencing other denominations as well. It was an attempt to remind the church of its divine authority, independent of the state, and to recall it to its Catholic heritage deriving from the ancient and medieval periods, as well as the Caroline Divines of 17th-century England.

The Oxford Movement and Its Leaders is a comprehensive bibliography of books, pamphlets, chapters in books, periodical articles, manuscripts, microforms, and tape recordings dealing with the Movement and its influence on art, literature, and music, as well as theology; authors include scholars in these fields, as well as the fields of history, political science, and the natural sciences. The first edition of The Oxford Movement and Its Leaders and its supplement contained comprehensive coverage through 1983 and 1990, respectively. The Second Edition, with over 8,000 citations covering many languages, extends coverage through 2001; it also includes many earlier items not previously listed, corrections and additions to earlier items, and a listing of electronic sources. 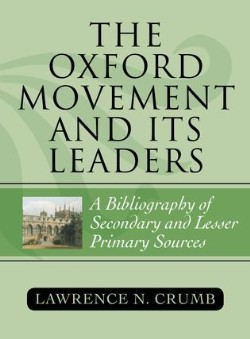 You're viewing: Oxford Movement And Its Leaders (Expanded) $173.00
Add to cart