Desert Breeze Publishing
Spurned twice since the death of her first love in a logging accident, Lainey Kade has become the object of talk. That Lainey, she’s a shrew all right. Not ever going to marry, likely, the gossips say. Fleeing heartache and flaunting convention, Lainey seeks solace instead in seeking adventure and breaking the rules.

Embarking on a journey where she hopes to put the past behind her, Lainey crosses paths with brothers Zane and Kelly Beumont and pretends to be a married woman. It isn’t long, however, before they find her out, and she soon forges an adventurous companionship with these men whose nightmares since the Civil War have never let them return home.

Following the lead of the next thrill, the ties of their friendship tighten, and Lainey denies love’s rekindling spark. But, as fires rage across the Wisconsin wilderness, the brothers’ attraction to her may tear them each apart, and Lainey may be consumed by the fury burning inside her.

Be the first to review “Red Fury” Cancel reply 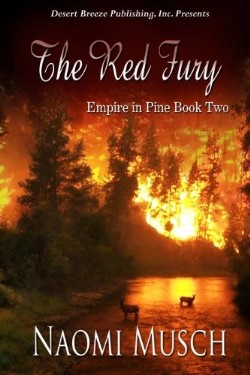