Redefining Grace : Verb – Living By His Presence And Moving In His Power

We have only scratched the surface of what God’s grace means!

Perhaps no other truth has experienced more controversy and counterfeit than the grace of God. The word “grace” is frequently used in the Christian community to speak of our undeserved salvation or an extra dose of spiritual strength.

But there is so much more to the grace of God. Indeed, we have only scratched the surface of the ocean that is the supernatural power of God’s grace!

In this landmark book, Phill Urena reveals that grace is, in fact, the most powerful force in the universe! But to access this supernatural power, we must understand it’s true meaning and learn how to apply it. Phill Urena has experienced miracle after miracle – even the dead being raised – by learning how to access the life-giving flow of God’s grace.

In Redefining Grace, you will learn how to:
*Partner with God to manifest His character and power.
*Walk in freedom from religious bondage and failure.
*Operate in the miraculous dimension of grace, releasing healing, deliverance, and miracles.
*Enjoy a deeper more intimate relationship with the Holy Spirit.
*Stop believing you are a “sinner” and start living like a “saint.”

Remove the shackles of guilt, shame, and religion! It’s time you discovered the abundant life that Jesus promised by encountering the fullness of God’s grace!

Be the first to review “Redefining Grace : Verb – Living By His Presence And Moving In His Power” Cancel reply 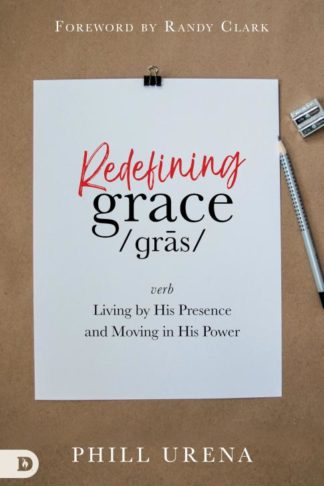 You're viewing: Redefining Grace : Verb – Living By His Presence And Moving In His Power $16.99
Add to cart