As a child, Jenny Holloway dreamed of living on a ranch someday; especially after hearing all the tales her husband Rick would tell of his adventures on his Uncle Max’s place in southern Missouri. That dream came true when they inherited his uncle’s ranch. Now thirteen years later as a widow and single mother to her ten-year-old daredevil son, Jenny struggles to keep the dream alive.

Gil Montgomery had his life all planned out, until a roadside bomb in Iraq ended his army career. When his dad suggested he work for him at the Hazy Holloway Ranch, Gil wasn’t too thrilled with the idea; but, he needed a job and there were worst things he could be doing with his time.

Gil is used to taking orders, even from women. What he isn’t prepared for are the feelings this little firecracker of a woman triggers in him. The unexpected death of her husband has left her jaded and afraid to risk her heart getting broken again. Somehow, he has to gain her trust and prove he isn’t going anywhere.

Be the first to review “Renegade Hearts” Cancel reply 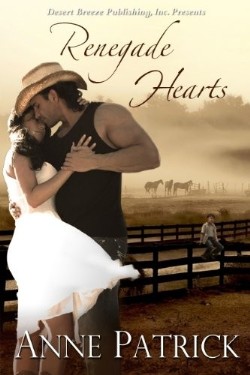