The god-like power promised by the lost desert city of Zerzura is as frightening as it is alluring.

Former secret agent Sean Wyatt and his best friend, Tommy Schultz, have never hunted anything like it. But the legend and the unlimited power it promises are so improbable that other archeologists-including Tommy’s parents-gave up looking for Zerzura decades ago.

Most call it a myth. That all changes when a chance discovery in the Middle East reveals long-hidden clues about the possible truth behind the Zerzura legend and catapults Sean and Tommy smack in the middle of a race to find the lost city and to protect humanity from its dark, unlimited dominion.

Unfortunately for Sean and Tommy, some very evil, very powerful men are also on the trail. To keep Zerzura’s near-limitless power from falling into the wrong hands, they must outwit a dark nemesis from their past, blast through his legions of gun-toting assassins, and forge new and unstable alliances that threaten their mission nearly from the start.

A breathless sprint across two continents, The Sahara Legacy is both a gripping tale of intrigue and an imagining of ancient powers that lie just beyond the limits of human control and comprehension. Grab your copy today and join the adventure.

Welcome to the IAA.

The International Archaeological Agency operates out of Atlanta, Georgia, and is focused primarily on securing and transporting artifacts. Now and then, IAA agents are required to go beyond that mission statement and venture into dangerous, uncharted waters.

The fact you’re looking at this book says you’re ready to join the adventure with the agents of the IAA, and enter a whole new world of discovery.

Ernest Dempsey blends elements from political, pulp, historical, travel, action and adventure, and conspiracy thrillers into a ripping hot, up tempo action story that will keep you pinned to the pages until you have to turn just one more. Each book represents hundreds of hours of research into history, secret societies, ancient cultures, and legends.

Welcome aboard. Enjoy the adventure.

Be the first to review “Sahara Legacy” Cancel reply 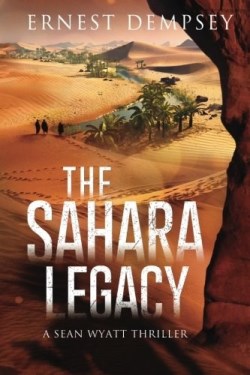