Borrowing a phrase from Erasmus, Robert Bolt in his play by the same name called St. Thomas More A Man for All Seasons and with good reason. Husband, father, eminently successful lawyer in England, an astute politician, second most powerful man in the realm, and one of the best authors of the Renaissance, he was also remarkably saintly. Faithful to the daily devotions and penances that he began as a young man More was a devout Catholic and an ardent defender of the teachings of the Catholic Church against Martin Luther. Known for his wit and sense of humor, he was the type of person we would all like to have for a friend. His dispute with King Henry VIII over the annulment of Henry’s first marriage and the primacy of the papacy over the Church in England resulted in his ultimate condemnation and execution as a martyr. G.K. Chesterton, during a visit to More’s home in Chelsea in 1929 said of him that he is more important at this moment than at any moment since his death…But he is not quite so important as he will be in a hundred years time. He may come to be counted the greatest Englishman, or, at least, the greatest historical character in English history. This book tells the fascinating and extraordinary story of his life.

Be the first to review “Saint Thomas More” Cancel reply 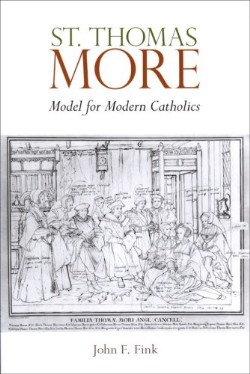