Surveying Abuse : A Journey Of Forgiveness And Freedom

A little girl hides, quietly crying and listening to her brother’s sharp howls of pain and pleas to stop as their mother beats him. She hopes she is not next. But she knows it won’t be long; she can’t hide forever. There is no way to escape. Life was not always this way for Marie Cook and her family. She once lived in the suburbs of Detroit, and life was wonderful. After moving outside of Detroit, something snapped and her mom began physically and mentally abusing her children. And her father turned a blind eye to the abuse that was going on in his own home. When she couldn’t trust her earthly father to protect her, how could she have faith in her heavenly Father? It was not until years later that she would have a relationship with God, and it was this relationship that brought understanding. In Surviving Abuse: A Journey to Forgiveness and Freedom, Marie Cook shares her horrifying story of abuse with readers so that they might be inspired and, yes, forgive those who have wounded them, as difficult as it will be, to get their hearts on the right track and start living in total freedom. Marie Cook lives in Michigan with her husband.

Be the first to review “Surveying Abuse : A Journey Of Forgiveness And Freedom” Cancel reply 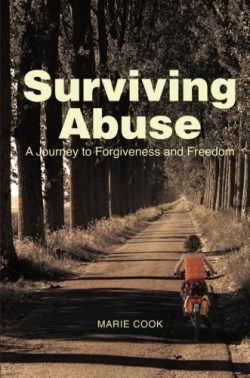 You're viewing: Surveying Abuse : A Journey Of Forgiveness And Freedom $18.99
Add to cart