Sir Walter Scott, one of the most widely read writers in the English language, is credited with inventing the genre of historical fiction. But his greatest distinction is that of being perhaps the greatest literary defender of Western Christendom-that cultural ideal, seldom fully achieved but, until recently, always aspired to, which viewed culture as an attempt to approximate Christian ideals and values in all things. The Talisman, one of his greatest novels, is the story of a Scottish Knight who sets out for the Holy Land during the Third Crusade to join Richard the Lion-Hearted in the confrontation between Christianity and Islam. Avoiding the common ideological stereotypes we so often hear today, Scott articulates through this classic story the real issue between the two religions without cant or prejudice. He shows the superiority of the Christian faith in a way that refrains from denigrating its enemies but which, like the knights it portrays, does not give any ground in the confrontation with Islam. It is a story more relevant today than when it was written in 1825.

Be the first to review “Talisman” Cancel reply 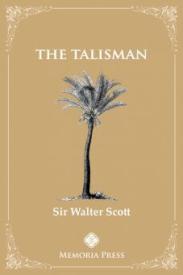