Winning Balance : What Ive Learned So Far About Love Faith And Living Your (Unab

At age 19, American gymnast Shawn Johnson is a four-time Olympic gold and silver medalist; a national- and world-champion athlete. Already a popular role model to all ages, in 2009 she captured the national spotlight again when she won the widely popular Dancing with the Stars. Yet Shawn is no stranger to hard work and adversity. Her loss of the major gymnastics prize everyone expected her to win in Beijing, the all-around Olympic gold medal, was the loss of a dream she’d worked for since childhood. And later, she suffered a potentially career-ending injury in a skiing accident that forced her life to a halt and made her rethink what was really important. She wasn’t sure who she was anymore. She wasn’t sure what her goals were. And she wasn’t sure she was satisfied with where she was with her faith and God. Could she find the right kind of success in life-the kind that doesn’t involve medals or trophies, but peace, love, and lasting joy? This is the amazing true journey of how the young woman who won an Olympic gold medal on the balance beam became even more balanced.

Be the first to review “Winning Balance : What Ive Learned So Far About Love Faith And Living Your (Unab” Cancel reply 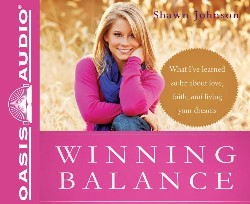 You're viewing: Winning Balance : What Ive Learned So Far About Love Faith And Living Your (Unab $27.99
Add to cart