Today considered a landmark of twentieth-century intellectual history, I and Thou is also one of the most important books of Western theology. In it, Martin Buber, heavily influenced by the writings of Frederich Nietzsche, united the proto-Existentialists currents of modern German thought with the Judeo-Christian tradition, powerfully updating faith for modern times. Since its first appearance in German in 1923, this slender volume has become one of the epoch-making works of our time. Not only does it present the best thinking of one of the greatest Jewish minds in centuries, but has helped to mold approaches to reconciling God with the workings of the modern world and the consciousness of its inhabitants.

This work is the centerpiece of Buber’s groundbreaking philosophy. It lays out a view of the world in which human beings can enter into relationships using their innermost and whole being to form true partnerships. These deep forms of rapport contrast with those that spring from the Industrial Revolution, namely the common, but basically unethical, treatment of others as objects for our use and the incorrect view of the universe as merely the object of our senses, experiences. Buber goes on to demonstrate how these interhuman meetings are a reflection of the human meeting with God. For Buber, the essence of biblical religion consists in the fact that — regardless of the infinite abyss between them — a dialogue between man and God is possible.

Ecumenical in its appeal, I and Thou nevertheless reflects the profound Talmudic tradition from which it has emerged. For Judaism, Buber’s writings have been of revolutionary importance. No other writer has so shaken Judaism from parochialism and applied it so relevantly to the problems and concerns of contemporary men. On the other hand, the fundamentalist Protestant movement in this country has appropriated Buber’s “I and Thou encounter” as the implicit basis of its doctrine of immediate faith-based salvation. In this light, Martin Buber has been viewed as the Jewish counterpart to Paul Tillich.

This is the original English translation, available in America only in this hardcover edition of I and Thou. Martin Buber considered Ronald Smith’s the best of the English translations and it was prepared in the author’s presence. The more poetic rendering, this translation can be looked at as the King James Version of Buber’s I and Thou.

Be the first to review “I And Thou” Cancel reply 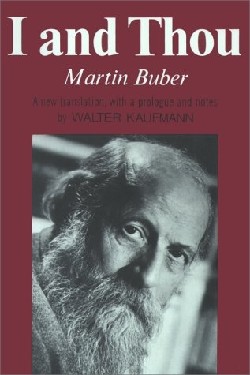