A happy heart is good medicine.

On October 8, 2015, Victoria Jackson was getting ready for her 45-minute stand up routine at Zanie’s Comedy Club in Nashville. But instead of enjoying the pre-show excitement, she was laying on the couch in the green room coughing nonstop, drinking tea with lemon and honey, and sucking on cough drops.

Vicki had many scary moments growing up: doing a back handspring on the four-inch balance beam; performing stand up comedy; auditioning for Saturday Night Live; and getting held up by a robber with a gun in a parking lot in downtown Los Angeles.

But being told she had cancer was her scariest moment. Join Vicki as she:
* wonders “why me?” and if her lollipop addiction caused the cancer
*writes a ukulele song in the MRI waiting room
*undergoes a double mastectomy with secret messages written in permanent marker to her doctor on her chest and stomach
*goes through chemotherapy, radiation, baldness, and lavender hair
*discovers that Jesus is enough
*performs at Zanie’s to a standing ovation nearly one year after her diagnosis

If you are one of the one-in-eight women who’ve been diagnosed with breast cancer, or if you know someone who has, this 21-day devotional is full of humor, insight, and comfort as you walk with God through this dark valley.

Be the first to review “Lavender Hair : 21 Devotions For Women With Breast Cancer” Cancel reply 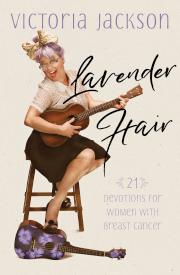 You're viewing: Lavender Hair : 21 Devotions For Women With Breast Cancer $17.99
Add to cart