From the editor-in-chief and managing editor of the Babylon Bee! A millenial seeker travels through a twenty-first century take on The Pilgrims’s Progress with allegorical versions of all our modern vices tempting him along the way– as well as a few timeless personified virtues that just might see him through. Biting satire and uncommon wisdom from the creators of the internet’s most influential comedy site, and an author of national bestsellerThe Babylon Bee Guide to Wokeness!

Ryan Fleming is a young agnostic reeling from his brother’s death. Though he is deeply angry with God, he makes good on a promise he made to his brother in the final moments of his life: to visit a church at least once. But shortly after his arrival, the slick megachurch’s shoddily installed video projector falls on his head–sending Ryan through a wormhole into another world.

After a narrow escape from the City of Destruction, where the comfortably numb townspeople are oblivious to the fire and brimstone falling like bombs in their midst and destroying their homes, Ryan finds himself on a quest: To make it back to his own universe, he must partner with a woman named Faith to awaken a long-sleeping King–the World-Maker who can make all things new.

The Postmodern Pilgrim’s Progress is brought to you by Kyle Mann and Joel Berry, the two comedic minds behind The Babylon Bee–which, with 250,000 newsletter subscribers and more than fifteen million page views per month, is the most popular satirical news site on the planet.

Be the first to review “Postmodern Pilgrims Progress” Cancel reply 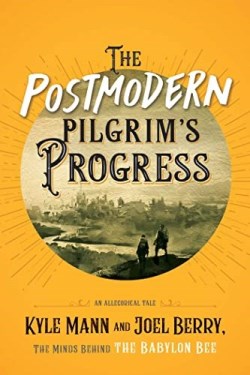