Prophetic Community : God’s Call For ALL To Minister In His Gifts

All God’s people have been given the ability not only to hear his voice, but to speak his words. Yet some still believe that the gift of prophecy ceased with the death of the New Testament apostles. Others believe that gifts are reserved only for those specially anointed and appointed.

Grounded in Scripture, international speaker and author Kim Maas will help you understand
– the history of the modern prophetic movement
– key misunderstandings and misconceptions about prophecy
– where prophetic community fits into God’s kingdom plan

When the body of Christ recognizes that we are called to be a prophetic community, the voice of God will be released with fresh power in the church and the family, in the halls of justice and of education, in places of business and of leisure, and in the streets of every neighborhood, city, and nation. Lives will be changed. Communities will be transformed. Culture will be influenced. And history will be made.

Be the first to review “Prophetic Community : God’s Call For ALL To Minister In His Gifts” Cancel reply 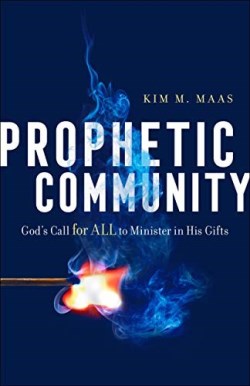 You're viewing: Prophetic Community : God’s Call For ALL To Minister In His Gifts $14.99
Add to cart