A WWII novel of courage and conviction, based on the true experience of the men who fought fires as conscientious objectors and the women who fought prejudice to serve in the Women’s Army Corps.

Since the attack on Pearl Harbor, Gordon Hooper and his buddy Jack Armitage have stuck to their values as conscientious objectors. Much to their families’ and country’s chagrin, they volunteer as smokejumpers rather than enlisting, parachuting into and extinguishing raging wildfires in Oregon. But the number of winter blazes they’re called to seems suspiciously high, and when an accident leaves Jack badly injured, Gordon realizes the facts don’t add up.

A member of the Women’s Army Corps, Dorie Armitage has long been ashamed of her brother’s pacifism, but she’s shocked by news of his accident. Determined to find out why he was harmed, she arrives at the national forest under the guise of conducting an army report . . . and finds herself forced to work with Gordon. He believes it’s wrong to lie; she’s willing to do whatever it takes for justice to be done. As they search for clues, Gordon and Dorie must wrestle with their convictions about war and peace and decide what to do with the troubling secrets they discover.

Susie Mast’s Amish life in Lancaster County has been shaped by events beyond her control, with the tragic deaths of her Dat and close-in-age brother casting long shadows. Now twenty-two, Susie remains unmarried despite her longtime affection for friend Obie Yoder.

Unfortunately, her concerns are soon multiplied due to her mother’s worsening health and her younger sister’s urgent desire for answers about her adoption. Once again, Susie faces the possibility of loss. Will long-held family secrets and missed opportunities dim Susie’s hopes for the future? Or is what seems like the end only the beginning?

Be the first to review “The Blackout Book Club” Cancel reply 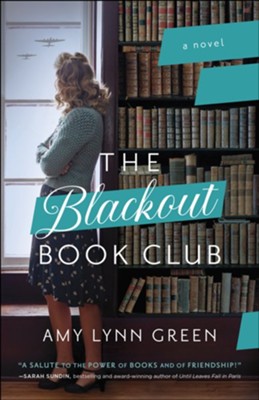 You're viewing: The Blackout Book Club $17.99
Add to cart